For a long time, there seems to be confusion amongst craftspeople regarding the Reciprocating Saw Vs Jig Saw.

Jig Saws can make intricate cuts from a 45-degree angle or less and are usually held horizontally. In contrast, Reciprocating saws are held vertically with no provisions for making angular cuts.

The lack of appropriate knowledge of these tools’ differences has caused a lot of injuries and poorly finished project s. In 2001, about 17,240 accidents associated with handheld tools were recorded by the CPSC’s National Electronic Injury Surveillance System (NEISS).

The need to know what tool functions for what activity is essential in eliminating hazards.

Here’s a detailed side by side comparison of these handy tools. Me and my friends have learned how to distinguish a Jig Saw from a Reciprocating Saw from own experiences. Let me open up.

As different as both tools may be, they share certain similarities. Here are some reasons why a reciprocating saw and jigsaw don’t seem so different from each other:

Both saws accept various blades that come in different sizes and girth that can be changed depending on the type of material to be used.

Both saws are also designed to be light enough to be used and transported using the hands. They also have handles that make them comfortable to operate.

They can both be used to cut through wood, metal, PVC, and nails. Reciprocating saws and Jigsaws are both versatile and make working on a project that requires different materials possible.

These saws cut through materials with their blades moving in a back and forth motion as they are turned on for use.

What is Reciprocating Saw

A reciprocating saw is a handheld power tool used by professional handymen to cut desired holes and curves through woods, metals, and other materials.

This cutting tool is named after the elliptical motion (back and forth strokes) of its blade as it cuts through the object placed in front of it.

The reciprocating saw is shaped like a typical hand saw, but with a thinner blade and an ergonomic handle that features a trigger lock and trigger speed, and other buttons that control it on its plastic body.

What is Jig Saw

A Jig Saw is a power tool, portable and light enough to be lifted and used to make intricate cuts and curves in wood, metals, and other materials included in the assembling and completion of a project.

The Jig Saw uses a reciprocating blade to execute and features a soleplate that makes cutting angles ranging from 0 to 45 degrees possible.

Jig Saws are usually held horizontally and placed upon the object or material to be worked on as the electric motor sets the blade to action.

A brief History of Reciprocating Saw

The reciprocating saw was invented by the Milwaukee tool company in 1951, with Jerome Schnettler and Edward Ristow being the top contributors to the successful outcome of the first-ever made reciprocating saw.

This famous power tool, formerly known as Sawzall, became famous due to the easy mobility features and its need for electricity, a massive innovation in the early ’90s, and a trend for upcoming power tools. The need for a power tool that is versatile, portable, mobile, and mighty was what drove Jerome and Edward to create the first Sawzall.

In 1923, Dewalt was founded by Raymond E Dewalt. The invention of a radial saw for woodworking brought this company to the limelight, and was then sold to Black & Decker in 1960, operating as one o their subsidiaries.

Today, they ship over 90 million tools made from the 7 manufacturing plants in the USA with the compact drill, hammer drill, angle grinders being one of their top products.

Makita has been known for manufacturing the best in-class tools in the world since 1915. They have 10 plants situated in 8 countries, where they create several top-notch masterpieces that facilitate woodworking and other forms of craftsmanship. Some of their best and most purchased masterpiece is the cordless drills and impact drivers.

Driven by innovation and the need to create powerful tools that facilitate home improvement and similar projects, Worx is known for manufacturing one of the best reciprocating saws in the USA. This fast-rising company was founded by Positec Tool Corporation, another manufacturing company that produces power tools, in 2004. The 56V turbine, Landroid, and Switchdriver are some of their top products since their establishment.

A brief History of Jig Saw

Since then, this workshop essential has been produced by many companies and modified in ways that make it more convenient for use. Some come with more power, better and versatile motions, even LED for better sight. The Jig Saw earned its place in the tool market as a better alternative to a circular saw.

With the love and thirst for innovative solutions that make living in the 21st century bearable, TACKLIFE has been one of the top manufacturers of Jig Saws since it was founded in 2015. They have about 25 million products in use across over 50 countries, with the cordless drill, pneumatic nailer, and buffer polisher being some of their most notable products.

Bosch has been improving the quality of life with impressive innovations since it was founded in 1886 by Robert Bosch. With over 400,000 associates around the globe and about 80 infrastructures in North America, Bosch is known for manufacturing the best jigsaws and reciprocating saws in the United States as well as vacuum cleaners, rotary hammers, and angle grinders.

For over a century, PORTER-CABLE has been one of the top manufacturers of the Jig Saw and Reciprocating Saw. Accomplishing several milestones as per innovative technology since the early ’90s and their impeccable customer service is why they are trusted by several customers and still in business. Some of their notable products are hammer drills, framing nailers, and sanders.

Being a subsidiary of Techtronic Industries Co. Ltd. (TTI), Milwaukee has stormed the tool market with its heavy-duty innovations since 1924. They produce quality and durable Jig Saws, and other tools like the framing nailer, fuel surge hydraulic driver, and the circular saw.

As a handyman or handywoman, you sure know when you need a reciprocating saw. Still, you might have never thought about why you need one or what makes it unique. Whether it is a corded or cordless reciprocating saw, here are some of its benefits:

A standard reciprocating saw is compact and doesn’t take up much storage space during or after use. They are also easy to transport in cases where you need to work in a different location.

Not only can reciprocating saws be used to cut through a variety of materials, but they can also be used to construct, demolish, and remodel based on the requirement s of your project.

Some materials are more difficult to cut through, and only an increase or decrease in the blade’s motion makes it possible to cut through without damaging the material in question. Reciprocating saws help users work on different materials at once while adjusting the speed to suit their demands.

The design of a reciprocating saw makes it safe to use. It reduces the chances of ever being involved in an accident. Its plastic body prevents shock, and ergonomic handles make it easy on the hands.

Depending on the material and project being worked on, different types of blades can be attached to the reciprocating saw. With each blade varying in length, size, thickness, and strength: for convenient use.

Here are some of the reasons why a Jig Saw is unique and needed in your workshop:

With the right blade, a Jig Saw can cut any wooden material no matter how thick. You can also use it to cut various other materials like concrete, steel, and drywall.

Jig Saws usually take up a compact design that makes it easy to transport. They also take little storage space in the workshop or store where you get to keep them before and after use.

A Jig Saw can make precise and intricate cuts depending on your project desires. It can be used to cut curves and complex shapes at an angle of 45 degrees or less.

The Jig Saw makes cutting materials easy and safe. You can barely have contact with the blade, especially if you’ve put all necessary safety precautions into consideration. It also requires little to no energy as it is designed to be placed on the object you want to cut.

The ergonomic design of a Jig Saw makes cutting convenient and less painful. You never have to deal with the pain blisters bring as its ergonomic handles and motor reduces the vibration you feel during use.

Compact reciprocating saws are also known as the one-hand reciprocating saws. They are light and have a bearable cutting power that makes it possible to be held with just one hand. They also come in corded and cordless forms.

This is the smallest form of reciprocating saw. They can be used in tight spaces and allows a maximum blade length of 12-inches.

This type features a cord attached to the Jig Saw and a plug that makes it connectable to a wall outlet for a continuous power supply. You can continue to use the corded Jig Saw as long as there is a power supply.

DIYers usually prefer cordless Jig Saws because it doesn’t limit your workspace. You don’t need to keep it plugged into a wall outlet at all times. It has a battery that can be charged, so you can use it with or without electricity and move freely without considering the cord’s length.

According to the Bureau of Labor Statistics of the U.S., a total of 5,333 fatal injuries were recorded in 2019. Hence, there is a need to abide by all safety tips provided as regards the use of power tools.

By comparing the Reciprocating Saw vs Jig Saw, we’ve learnt that both are great power tools for everyone. They can both be added to your tool kit as they both have varying functions needed for the completion of different projects.

To avoid hazards and an unprofessional finish, it is important not to use them interchangeably. Remember always to use the appropriate safety gears when making use of any of the saws. 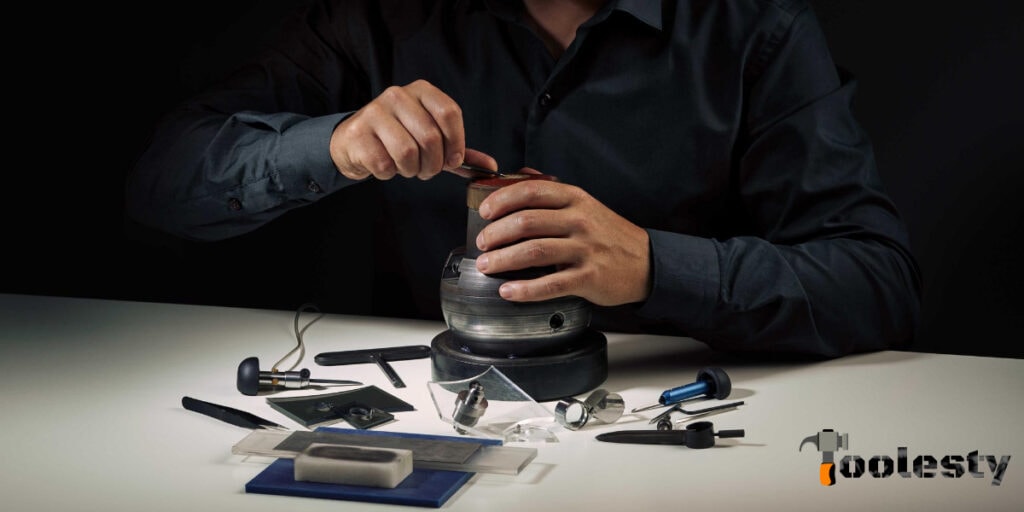 To avoid unnecessary expenses, marking your tools is your best bet yet. Making them distinguishable makes it easier to identify in the case of recovery… 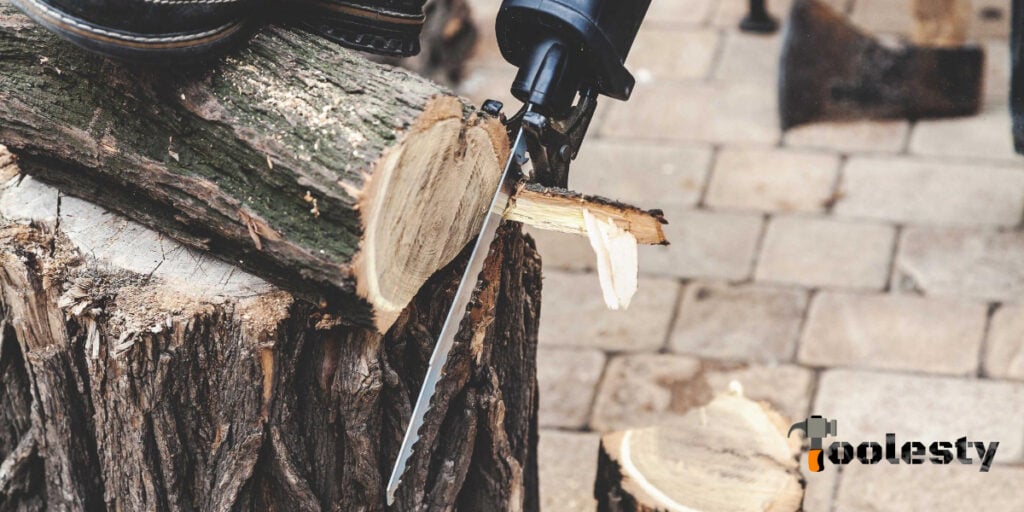 Reciprocating saw uses can be more than what meets our eyes. Sanding rough edges to emergency rescue services, anything is possible with this handy power… 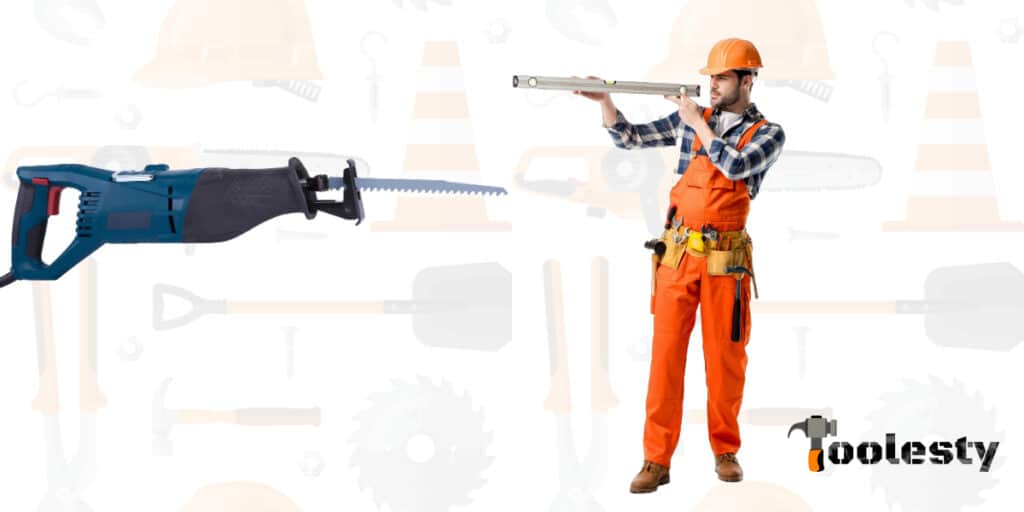 Are you asking yourself how to cut straight with a reciprocating saw? I did too, and here’s what I’ve learned from my experience using sawzall.… 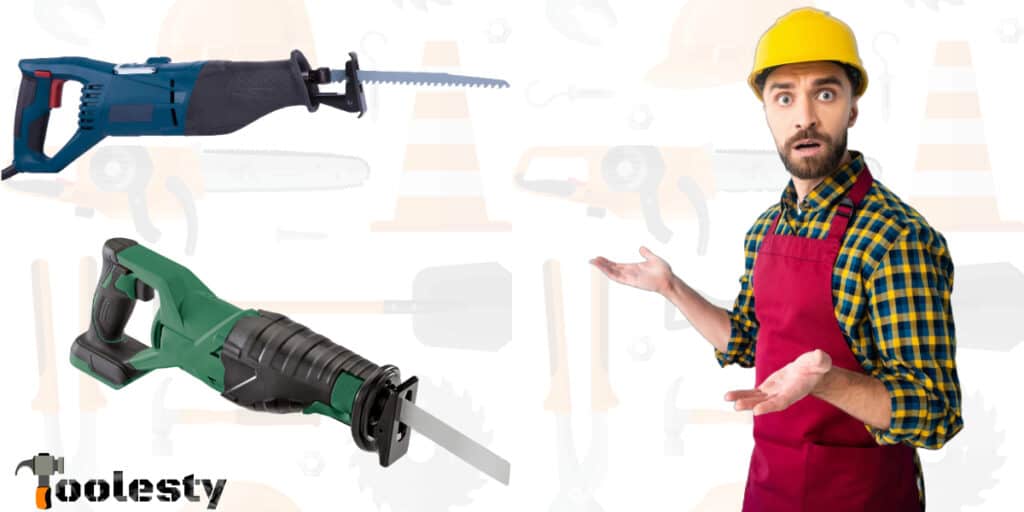 Corded vs. cordless reciprocating saw, which one is good for me? Puzzling, right? Let’s understand the fundamental differences between the cordless and corded reciprocal saw…

Brian is a DIY enthusiast by passion and Home Improvement Training and development specialist by profession from Arkansas. Toolesty is the marriage of his passion and professional enthusiasm. Toolesty.com is intended to share useful tips and hacks.